Ever wonder how you might play audio clips to your listeners as if it came through your microphone? I’ve wondered this a lot myself, and after many long, frustrating, and fruitless searches on the internet, Stack Overflow, Reddit, etc., I decided to write my own software to do just that. My solution is called UniversalSoundBoard and uses the Java Sound API with virtual audio devices to play arbitrary audio as input to the microphone.

This functionality is provided by various soundboard programs, which are already available in a variety of paid, freemium, or open source flavors. However, every implementation I came across lacked at least one of these essential features:

UniversalSoundBoard provides all of these features.

My article covers the following topics:

My ultimate vision is to build a soundboard that plays audio clips from a vast library, triggered by fuzzy matching typed commands like “@troll in the dungeon”, rather than having to input a predefined hotkey combination or manually choose the file.

If you’d like to dive straight into the code and tutorial, check out the open source GitHub repo. I’ve provided a detailed technical guide on getting started.

What is a soundboard?

Taken from the Wikipedia article:

A soundboard is a computer program, Web application, or device…that catalogues and plays many audio clips…The soundboard is also used to facilitate humor, highlighting some of celebrities’ more unusual utterances, or allowing for juxtaposition or even “composition” of quotes and sounds that would otherwise not go together.

Why build or use UniversalSoundBoard (USBD) when there many other higher quality soundboards available? USBD is a free, 100% open source, programmable, app and OS agnostic soundboard program. No other soundboard I found in my search met all 5 criteria.

USBD is written as a Dropwizard RESTful webservice and provides an HTTP API to programmatically control the entire soundboard. One can issue GET requests to figure out what sound devices (microphones, speakers) are installed, make POST requests to use with with certain audio formats, and make additional POST requests to play any audio file. The USBD API is extendable and can be used without being aware of nuances of the underlying sound APIs. Further, one could build a GUI by implementing the USBD HTTP API.

In my search, I only came across soundboard software that were GUIs with no advertised programmatic interface

UniversalSoundBoard is open source. Anyone can contribute to it, learn from, or build their own software on top of it.

There are some free soundboard programs, but they aren’t open sourced and it makes learning from them hard. By open sourcing this, I hope others are able to learn from my work and result in saving themselves the countless hours of research that I had to do.

The higher quality soundboard software are usually paid (and also still don’t offer a programmatic API?!). My use case for a soundboard is quite simple: programmatically play an audio file through the microphone anytime. I have no need for more intricate or advanced audio setups, therefore others who desire simple functionality shouldn’t have to pay for features they don’t need.

Discord, Zoom, and other applications do offer integration APIs to build powerful customizations. However, this comes with a penalty of learning a 3rd party API and being restricted to what is offered. Further, this require maintaining one or more implementations of the same software.

Since the functionality of USBD is so simple (play an audio file through the microphone), there is no need to build integrations. Instead, a single standalone app can interface with the OS sound system, which is then used by any voice chat application.

USBD accomplishes this by use the Java Sound API and leveraging virtual audio devices.

Some soundboard software only works on Windows, others only work on macOS, and some only on Linux. I happen to jump between macOS and Windows a lot when I’m gaming, and it’d be nice to just use a single software on both.

USBD accomplishes this by being 100% Java. Meaning once it’s compiled, it should theoretically be able to run on any Java compatible operating system. Indeed, I can compile USBD on macOS and the jar runs perfectly on my Windows machine. In theory Linux should also work, though I have yet to test this (I welcome any readers confirming this!).

At a high level, USBD works by streaming microphone input and audio file input (separately) into a virtual audio device (VAD). The VAD receives audio bytes from both streams and automatically turns this into microphone input. This is made more clear in the following steps:

In the next sections, I explain the different technologies underlying USBD and how they work together to create a programmable soundboard.

USBD organizes audio devices into 2 types: (1) sinks and (2) sources. These more or less correspond exactly to Java’s notions of (1) target audio devices and (2) source audio devices. I chose to use sink instead of target as I found the naming more intuitive. This terminology is also heavily influenced by PulseAudio. Thus defined:

Since microphones are sinks, they only offer APIs to read any captured audio bytes. This means there is no direct way to programmatically provide input to a microphone. This is where a virtual audio device is required.

In contrast, sources offer only offer APIs to write audio bytes. Hence it is trivial to write a Java program to play an audio file on physical speakers. This is done by streaming audio bytes and using the SourceDataLine write method. The reverse–capturing audio bytes being sent to a speaker, is not of interest here, since we’ll always know what was played in the sound board program.

Some audio devices can offer both sink and source interfaces. In particular, virtual audio devices can support both sink and source interfaces. This means they can both receive bytes (like a source/speaker) but also output bytes like a microphone (sink). More importantly, they can be programmed to automatically take bytes written and turn these into input bytes. Thus, acting like a microphone that can be written to.

Thankfully, there are multiple free and open source virtual audio devices available for all major operating systems. I’ve tested the ones below with USBD on both Discord and Zoom.

There are many actions USBD needs to support to be a functional programmable soundboard. Each soundboard action generally corresponds to a single HTTP request.

USBD provides persistence through an embedded Apache Derby SQL database. This allows maintaining the different audio wirings of physical and virtual audio devices so users do not have to re-create these each time the server is started. I use Liquibase to automatically create the database (if it doesn’t exist) and write its schema in SQL. To seamlessly map database rows to Java objects, I use Rosetta.

The follow diagrams illustrate the two key flows of USBD and how the different technologies interact. 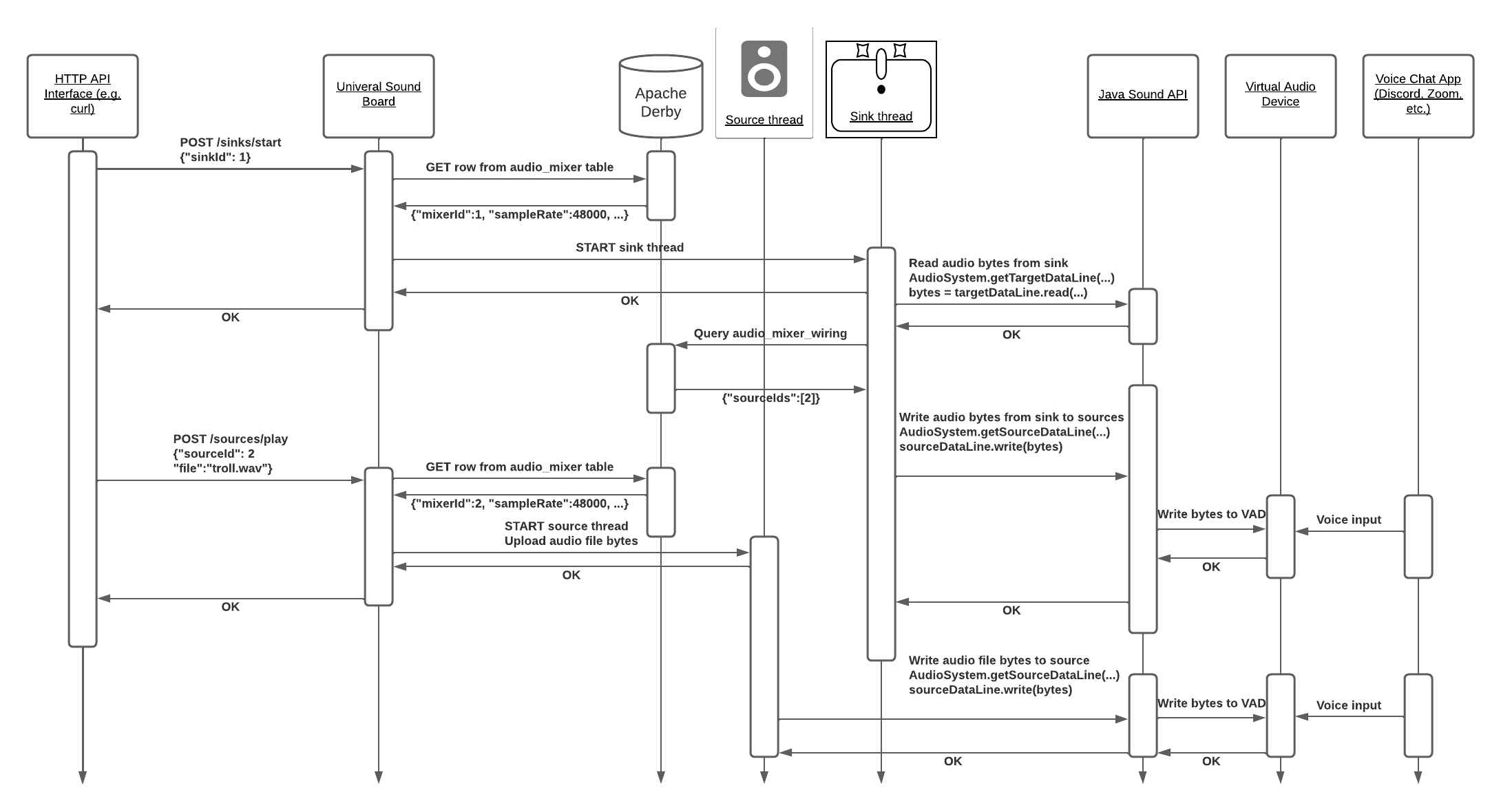 This flow illustrates how the microphone and arbitrary audio files are written to a virtual audio device, ultimately becoming a single audio input for a voice chat application. In the first part, the user references the ID of the sink set up in the previous flow, which is the microphone being used. The user asks USBD to start the sink, which will turn the microphone on and cause all audio input bytes to be written to the BlackHole virtual audio device. With BlackHole specified as the audio input on the voice chat application, listeners will hear the user’s microphone as normal. Separately, the user then specifies to play an audio file to the BlackHole device, referencing the source ID set up in the previous flow. This causes all audio bytes to be written to the BlackHole device, used as input for the voice chat application, and ultimately heard by listeners on the other end. Throughout this flow, the database is queried to get the correct audio devices and formats.

In this article I explained why I created UniversalSoundBoard (USBD), the different use cases of a soundboard, and how USBD works.

UniveralSoundBoard is a free, programmable, open source, app and OS agnostic soundboard program. I created USBD for my own personal usage, as a building block for more complex soundboard applications, and to share my learnings with others looking to learn the same.

I invite others to explore these next steps and what could be built on top of UniveralSoundBoard. I’ve enjoyed using UniversalSoundBoard in my own Discord and Zoom sessions with friends and I continue to plan to do so.